vessels inspired by the shores of Massachusetts 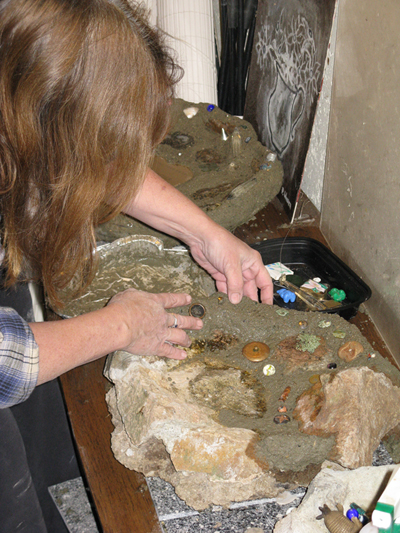 Below are Peggy's thoughts on the creative process leading to these sculptures.

I began mixing rocks and cement together several years ago in an attempt to replicate a rock that had naturally eroded to form a basin. My desire was to create a birdbath that would look as if it had been created by the magic of nature alone, and would enhance the natural New England landscape when placed in the garden.

While experimenting with embedding items such as crystals, marbles, beads and shells into cement to personalize a birdbath for a friend, my daughter Amelia suggested that I could also incorporate ashes from beloved family members thus creating a meaningful, living memorial. She thought this sort of a memorial would be especially meaningful to bird and nature lovers, whether for pet, parent, or sibling.

In speaking with friends about this idea, I discovered that many had boxes and various vessels containing the ashes of a loved one tucked away. I also discovered that many of my friends also wanted to do something meaningful with these ashes but simply did not know what that could be. Several friends embraced my idea, and hired me to create personalized, one of a kind birdbath memorials for them. It seemed a need truly existed for this kind of product.

I have found creating these memorials very satisfying. There certainly is something gratifying about helping people remember their loved ones the way they believe those who have passed on would have wanted. Helping others reach closure has shown me just how important acknowledging this final stage of mourning can be.

images of the vessels